October 5, 2012  |  The Fall Season for Beat The Streets – Los Angeles has kicked off with seven middle school wrestling programs in action.  Through a key combination of partnerships within the metropolitan area, BTS – LA has broadened its outreach from the three schools it started with last spring.  In association with After School All Stars and Bright Star Schools, our program is working within diverse communities throughout LA’s landscape.
Located in the San Ferndando Valley, we have William Mulholland Middle School, Vista Middle School, George K. Porter Middle School and Mount Gleason Middle School located the furthest north.  In the South, we have recently added Thomas Alva Edison Middle School and Stella Middle Charter Academy.  Rounding out the seven programs, closest to downtown is the Los Angeles Leadership Academy, which enters its second wrestling season with Beat The Streets.
Our current programs are led by a diverse experienced set of coaches which can offer the student athletes who participate a wealth of knowledge. What’s more, several of our coaches are also currently serving as wrestling coaches in local high school programs and independent clubs so not only do they bring their past extensive experience into the room but reference active curriculum as well.
Stay tuned for more on our progress through this second season and for upcoming announcements about competition jamborees. 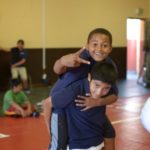