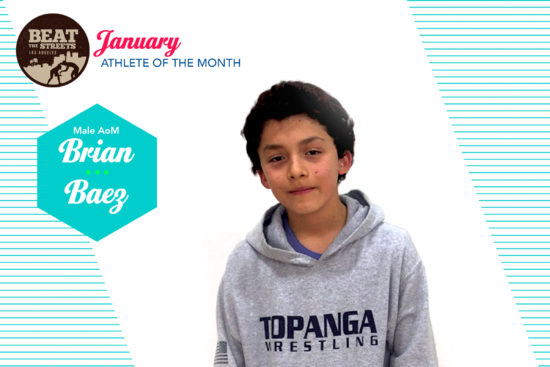 Brian Baez is a 6th grader in the Topanga program. He has been wrestling for three years, and his favorite wrestling move is the Ankle Pick. His favorite BTSLA event was the Futures Camp in 2016, where he participated on Team Honey Badgers. In his free time, Brian enjoys fishing – he once caught 15 fish at the PALS Summer Fishing Trip. Brian’s future goals include joining the El Camino or Birmingham Wrestling Team in high school, and becoming State Champion this year. In the future, he wants to be an Olympic Wrestler or Immigration Lawyer.
“Brian is the type of kid that dreams about wrestling. And the hard work ethic he has dedicated to this program has transferred into the classroom, we are very proud of him and know he will continue working hard and making us proud”  – Officer Juan Estrada
DONATE