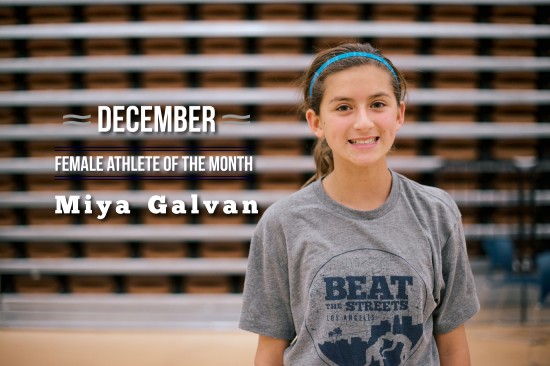 December 27th  |  Griffith Middle School athlete Miya Galvan earns December Female Athlete of the Month honors. Miya, a 7th grader, is in her first year of wrestling after being introduced to the sport through a wrestling demonstration at her school.
“Miya is definitely my most dedicated athlete. She is usually the first one to arrive for practice and one of the last to leave. She competes hard during practice, which really helps set the tone we want for our program.” said Coach Simon Orozco.
Miya’s commitment to her new sport took her to BTSLA’s Fall Clinic where she met 2012 Olympic Bronze Medalist Clarissa Chun. Just day’s later she participated in BTSLA’s 2013 Fall Jamboree, finishing 3rd in a division with several experienced wrestlers.