At Tokyo in 1964, Japan’s Osamu Watanabe ended his career undefeated by winning his 186th consecutive match to claim Olympic gold.
Before point scoring was introduced, wrestling matches continued until one wrestler was finally forced to the ground.
Freestyle Wrestling developed in part from “Catch as Catch Can”, a variety of Wrestling that was popular in the 19th century and at fairs and festivals across the UK and the US.
The longest Wrestling contest in Olympic history occurred at Stockholm in 1912, when a middleweight match between Russia’s Martin Klein and Finland’s Alfred Asikainen went on for an amazing 11 hours.
Alexander Karelin “The Russian Bear” won Olympic Gold medals in 1988, 1992 and 1996 for the former Soviet Union and Russia.  He was undefeated in international competitions from 1997 through 2000.
Greek Philosopher Plato was a great wrestling fan and competitor. He showed up to the games of the ancient Olympics incognito and stayed in makeshift barracks to avoid being recognized. 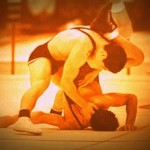