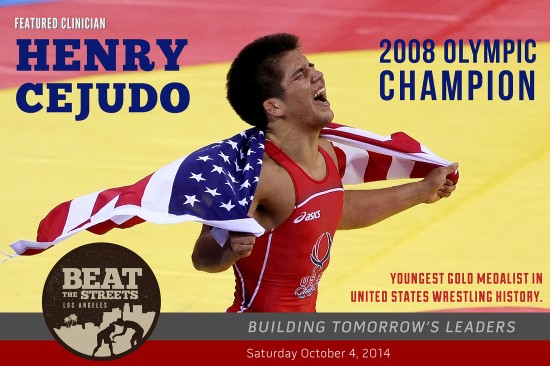 October 2, 2014 | Olympic Champion Returns Home to Give Back
​Olympic Champion, Henry Cejudo returns to Los Angeles, a community he once called home to teach young people the sport that changed his life. Cejudo is donating his time to BTSLA to teach, mentor and inspire young people at the October 4th clinic hosted by Birmingham Community Charter High School.
After winning Olympic Gold in 2008 at the the Beijing Olympic Games, becoming the youngest ever American wrestler to accomplish this feat, Henry authored “American Victory”, a memoir about overcoming his life’s challenges through his wrestling pursuits. He was recently signed to the UFC, transitioning his wrestling skills to the world of mixed martial arts.
Henry’s unique perspective relates well to BTSLA’s mission of transforming the lives of youth through the sport of wrestling. His first hand account of how wrestling changed his life is sure to have a positive impact on BTSLA participants.