My Favorite Intersection: An Editorial by Board Member Brian Guerrero 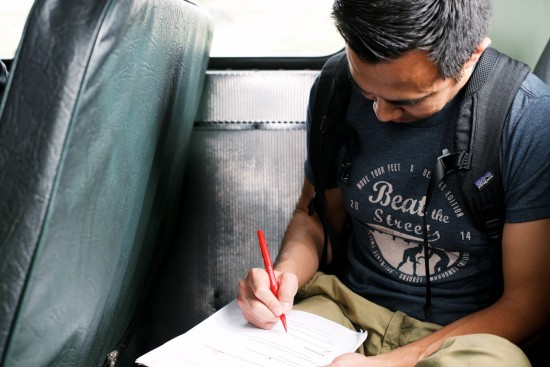 Board Member Brian Guerrero sits at the back of the bus to review notes during an on-location film project for Beat the Streets LA. Photo by Cal Bingham.

December 31, 2014  |  We recently received this letter from Board Member and volunteer Creative Director Brian Guerrero about his time with our organization and we would like to share this with our community.
“My Favorite Intersection” by Brian Guerrero
Being part of Beat the Streets Los Angeles has been a convergence of two things that are very near and dear; the sport of wrestling and being a creative. Perhaps two things that I never imagined would intersect in my personal life.
Walking away from the sport, as a competitor, in 1998 due to injury was very difficult for me. In many ways it was more challenging than the injury itself. Doing something day-in and day-out, year-around from age 8 to 19… it’s something that becomes part of your identity.
I was fortunate to find architecture, and transfer into it as a Major for college. And in some sense get lost in it. Becoming immersed in architecture, particularly architecture school isn’t something that happened overnight but slowly over a couple years began to shape me, not unlike my years wrestling. As in sport, the outcomes planned are not always reached but what might be gained along the way are intangibles; resolve, adaptability, an open mind. These traits that cultivate growth through sports also foster creativity. It was the kind of transition I needed after wrestling. Unbeknownst to me, it was also something that would bring me back to the sport.
After college I headed to the East Coast eventually landing in New York at an architectural facade consulting firm in Lower Manhattan. Over the Thanksgiving weekend of 2007, my wife Kat and I drove up to Albany to have lunch with my cousin Eric who was coaching (Assistant Coach) his university’s wrestling team, Oklahoma State, at the Journeyman Duals. Still a fan of the sport, but not an active member in the wrestling community, I’d occasionally meet up with Eric to watch his team compete live, but mainly it was to just visit with him, as cousins do. During our visit that weekend I chatted briefly with the head coach, John Smith, who I had gotten to know over the years while Eric was competing for Oklahoma State. John asked me about work, about living in New York City and asked “Are you staying involved in wrestling?” to which I hesitantly answered ‘no’. Without pause he suggested I get involved with a youth wrestling program in the City. He gave me a name and urged me to call. He said they needed coaches. The program was Beat the Streets.
I eventually followed up. I contacted the director and he invited me to come check out the program. It so happened to be in the neighborhood of my office. The biggest school district in America and arguably the largest market of architectural firms in the world, and this one little school gymnasium for Beat the Street’s headquarters and my then office were 3 blocks from each other! Fortuitous? 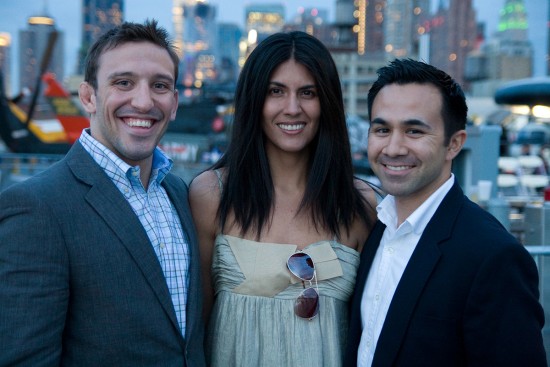 What started as ‘maybe I’ll stop by from time to time and help their coaches with the kids’ turned into two years as the Volunteer Coach for their training center, traveling to competitions throughout New York, Pennsylvania, Georgia and North Dakota. That time with Beat the Streets New York, the original program in this now nationwide grassroots wrestling movement had a profound impact on me. It was a chance to give back to the sport that gave so much to me. And in 2010, when a job opportunity came around that would relocate Kat and I to Los Angeles, it was one of the hardest parts about leaving New York. I was leaving behind friends and coaching relationships forged in the fire of the sport. I felt, reservedly, like I was leaving wrestling again.
About eight months after arriving in LA, I was contacted by our now Board President Andy Barth. Andy was planning to launch a Beat the Streets program in Los Angeles, and was looking for ardent like-minded people to help bring the program to fruition. I was in.

Today, three and a half years later, I feel honored to be part of such an outstanding organization and blessed to have been here for it’s genesis in LA. Who would have known that the lessons learned about the creative process in school would have fostered an appetite for photography and storytelling? What’s more, who would have known that I’d be able to apply it to wrestling?
Thank you for allowing me to be part of our organization’s journey.

Special thanks to Justin Hoch (jhoch.com) for providing the Beat the Streets New York photos.