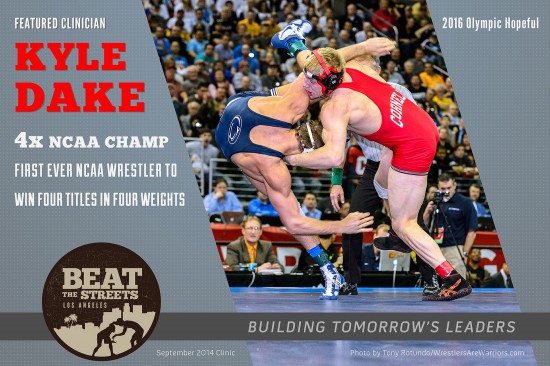 September 19, 2014 | 4. 4. 4. When talking about former Cornell University wrestler Kyle Dake, the number 4 holds special significance. Dake, appearing this week in Los Angeles as a special guest to mark the beginning of BTSLA’s 2014-2015 season, won 4 NCAA wrestling championships in 4 years, at 4 different
weight classes. A feat that had never been done before the 2013 graduate capped off his senior campaign with a perfect 37-0 record in route to his unprecedented 4th title. Since graduating, Kyle has continued his wrestling success and now stands as a top hopeful to make the 2016 US Olympic Team.
BTSLA, now in the 3rd season of providing dynamic youth wrestling programs, kicks-off the season with a free wrestling clinic on September, 21st at S. El Monte High School. Serving as the special guest clinician, Kyle will share his wrestling knowledge and life story with the over 200 pre-registered attendees.
The 2014-2015 season will see BTSLA programs at over 20 middle school and community sites serving more than 650 Los Angeles youth.
Host school S. El Monte High School is home to one of BTSLA’s community youth programs in partnership with the City of S. El Monte. The wrestling program is offered on Tuesday’s and Thursday’s from 6:00-7:30 for area youth ages 7-14.