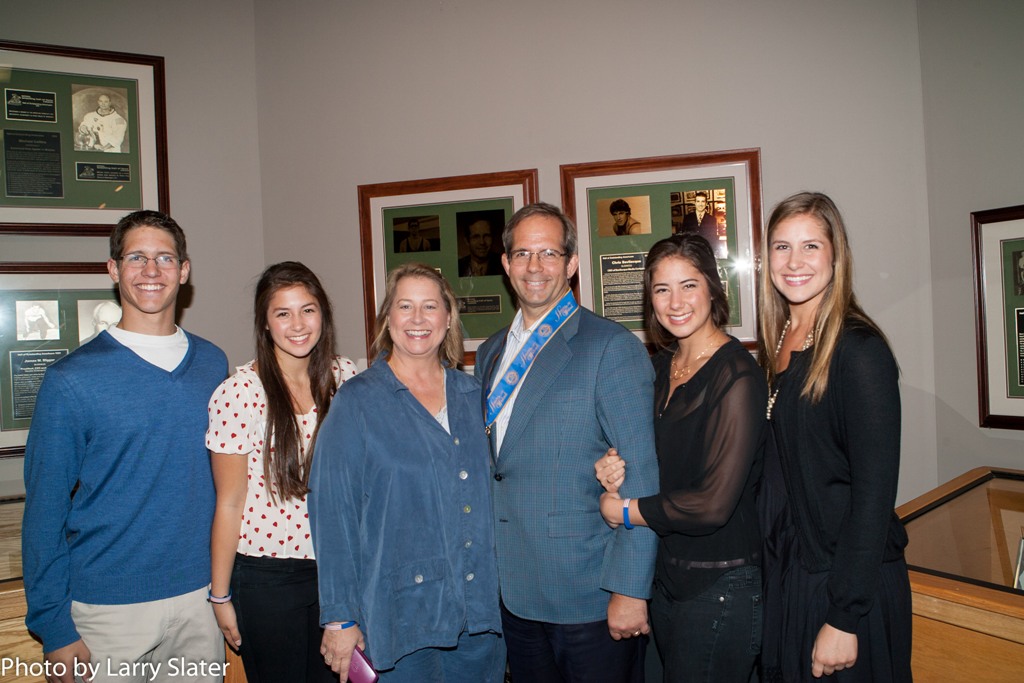 Andy Barth is joined by his family at the National Wrestling Hall of Fame.   Photo by Larry Slater

STILLWATER, Okla. – Columbia wrestling alumnus and prominent benefactor Andrew F. Barth ’83CC, ’85BUS was honored Saturday evening at the National Wrestling Hall of Fame & Museum, receiving the Outstanding American Award for the success he has had following his wrestling career and his incredible commitment and support of the sport of wrestling.
Barth and former Penn State wrestler Chris Bevilacqua were the 2012 recipients of the Outstanding American Award, which recognizes individuals who have used the disciplines of wrestling to launch notable careers in other works of life, such as science and technology, business and industry, government and the military and the arts and humanities. The 2012 Hall of Fame induction class included Fred Fozzard (Argentina, Oklahoma State), Stephen Neal (Turkey, Cal State – Bakersfield), Greg Strobel (Oregon State, USA Wrestling) and Chris Taylor (Iowa State, USA Wrestling).
“I’m thoroughly thrilled,” Barth said. “It’s wonderful to be able to honored amongst so many great wrestlers and in part for what I’ve done for Columbia, which I did out of love for the university and appreciation for all that the college, the university and the wrestling program did for me. It brings together a lot of things that mean a lot to me and are very special. It’s a really wonderful night and it’s something I’ll remember very fondly for a very long time.”
Barth was a member of Columbia’s varsity wrestling team from 1979-83 and was a team captain as a senior in 1982-83. The Lions won three consecutive Ivy League titles in his first three years on the team. Barth competed in the 177-pound class as a walk-on first-year in 1979-80 and bumped up to 190 pounds as a sophomore the following year. His best season was as a junior in 1981-82 when he played a key role in helping Columbia to its third straight conference title. That year, Barth compiled an 11-9 overall record and was named an All-Ivy League Honorable Mention. During his Columbia wrestling career, Barth totaled a 32-35-1 record and played an integral role in one of the most successful stretches in program history.
Barth graduated summa cum laude with a degree in economics from Columbia College in 1983 and earned his masters in business administration from the Columbia Business School in 1985.
The Queens native also represented the New York Athletic Club in Greco-Roman and freestyle events from 1980-85 and won the 1985 Eastern AAU Greco-Roman title. After graduating from the Columbia Business School in 1985, Barth moved to Los Angeles to work for The Capital Group as a financial analyst. Today, he is Chairman of the Capital Guardian Trust Company and Capital International Limited. His leadership was crucial to the growth of Capital Group from 25 billion dollars in assets in 1985 to 1.2 trillion dollars in assets in 2011.
Barth has been one of Columbia wrestling’s strongest supporters. In 2004, he made a large contribution to endow Columbia’s wrestling program and fund renovations to the Lions’ wrestling room, which would be later named in his honor in 2008. In 2005, Columbia announced the endowment of its head wrestling coach position with the title of Andrew F. Barth Head Coach of Wrestling.
Barth has been heavily involved with community and charitable work throughout his distinguished professional career. He was twice elected to the Board of Governors of the San Marino Unified School District from 1997 through 2005, serving three years as president. Barth put in place the foundation that earned San Marino the highest academic performance index ranking of all unified school districts in the State of California for seven years in row.
“When I graduated from business school, I had been involved with wrestling for 10 years,” Barth said. “I enjoyed it greatly. I enjoyed my time at Columbia and enjoyed my experiences competing for the New York Athletic Club. But I didn’t know what the future would hold. I started to get involved again supporting Columbia and that grew to a significant, important and substantial level of support. I was able to be involved with the sport with my son, with the local community and it’s just grown from there. To be able to be involved with wrestling in many different ways and at many different levels – to be able to do that, I never would have imagined it. It’s more than I could have hoped for. I’m grateful that I’ve been able to have the success and ability to do that and hopefully I can continue to do that.”
Barth has received numerous awards, including the John Jay Award from Columbia University in 2011, the International Medical Corporation Global Humanitarian Award in 2011, the After School All Stars Enlightenment Award in 2007 and the Golden Apple Award in 2006. He was also instrumental in obtaining a replica of an ancient training manual on wrestling for the National Wrestling Hall of Fame.
Source: Columbia University Athletics