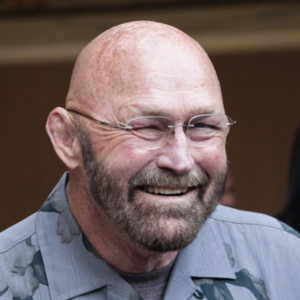 Tom attended El Camino Community College in Torrance, California. Transferring to Oklahoma State University in 1972 where he received his B.A. and M.A. in History. He later received a M.A. degree in Education-Physical Education from Azusa Pacific University.

Presently Tom is a professor at El Camino College in the Health Sciences and Athletics division. At El Camino College he instructs courses in Fitness and Conditioning as well as Physical Education, Recreation and Contemporary Health.

As an athlete Tom was a State Champion at Heavyweight for El Camino College, a state MVP and Community College All-American. At Oklahoma State he was a Big 8 Champion at Heavyweight as well as being a 2X All American. He represented the US at the Tbilisi Tournament where he placed second and was a Pan American Champion in Mexico City. He is also an USA Wrestling and AAU All American. He rounded off his wrestling career with a pair of USA Wrestling Veterans National Champion titles and a 4th in the World Veterans Championships that was held in Martigny, Switzerland.

His coaching career included a stint as a Graduate Assistant at Oklahoma State, 11 years as Head Wrestling Coach at El Camino College in Torrance, Ca., and 10 years as Head Wrestling Coach at West Torrance High School also in Torrance, Ca. He is now the assistant freshman wrestling coach at West Torrance HS. In addition to previous coaching stints, Tom for the past 10 years has worked as wresting official and is the President and Instructional Chairman of the South Bay Wrestling Officials Association.

Tom lives in Torrance, CA., with his son David, who wrestled HWT at Appalachian State University and former El Camino College wrestling coach great, David Hengsteler. He also has two daughters, Elizabeth Hazell, who is the assistant women’s volleyball coach at El Camino College where she also teaches part time. His other daughter, Beverly Hazell is finishing up her Masters degree at CSU East Bay this year and will be working toward a teaching position in the Fall.