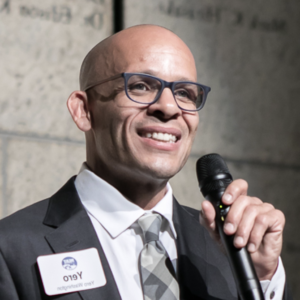 Mr. Washington, a product of inner city Oakland, has used the lessons learned through the sport of wrestling to overcome many obstacles in his life. Wrestling literally prepared Yero for life’s many challenges and has motivated him to achieve many of his personal and career goals. He aims to have that same type of influence on the lives of young people in Los Angeles.

After leaving Oakland and moving to Porterville at the age of 15, Yero picked up the sport of wrestling. He became the first ever State Wrestling Champion in Porterville High School history his senior year. He went on to attend Fresno City College, where he earned his Associate of Arts degree and won a California Junior College State Wrestling Title.

Yero then enrolled at California State University, Fresno, earning his Bachelor of Science degree in Physical Education. During his time at Fresno State, he garnered All-American status twice in the sport of wrestling. Yero went on to pursue wrestling on the international scene, becoming a USA National Team member, traveling around the world with Team USA.

Prior to Beat The Streets – Los Angeles, Yero was the Head Assistant Wrestling Coach at Columbia University (2004-2007) and Iowa State University (2009-2012). He brings his work and life experience to Beat The Streets – Los Angeles, with the hopes of having an immediate and long lasting positive impact on underserved communities.