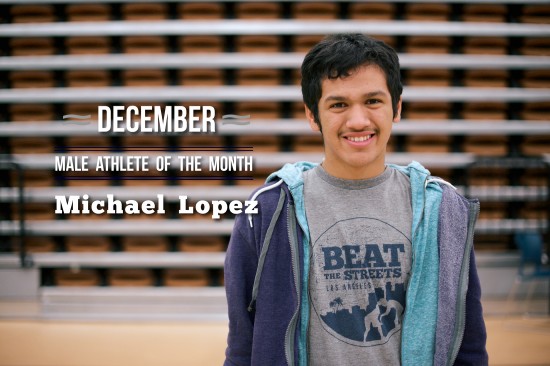 December 27th  |  BTSLA awards December Male Athlete of the Month honors to Michael Lopez of Mulholland Middle School. An 8th grader, Michael was introduced to wrestling by his brother who was a varsity wrestler at Birmingham High School. He has participated in BTSLA since it’s inception at Mulholland MS through a partnership with After-School All-Stars LA and has competed in 3 BTSLA events. Michael entered his first open competition last summer after being selected as a recipient of the 2013 Summer Camp Scholarship Program.
“Michael’s tenacity is as incredible as it is contagious. He shows up to the practices ready to wrestle and fires up the troops in every drill, activity and game. He’s great for our program on so many levels; we’re lucky to have him.” said Coach Ignacio Andrade.
Michael won BTSLA’s recent Fall Jamboree in convincing fashion and hopes to compete for Birmingham High School next season.